Beaches, cows, horses, apple trees in blossom and half-timbering of course, yet so many other treasures to discover.
A land of history, from the Vikings to D-Day.
A diversity of extraordinary landscapes enhanced with fabulous heritage including the marvel of the Western World, the Mont Saint-Michel.
Deauville, Honfleur, Granville, Étretat… Giverny, Bagnoles de l’Orne, the Pin national stud, etc.
Water sports, walking, golf and, of course... gastronomy. 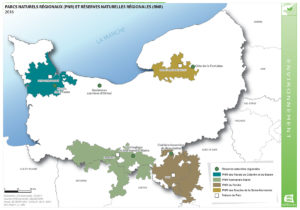 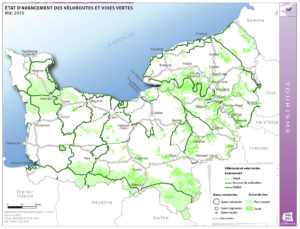 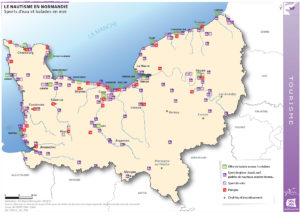 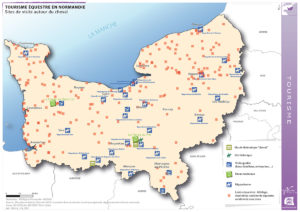 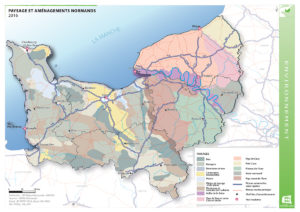 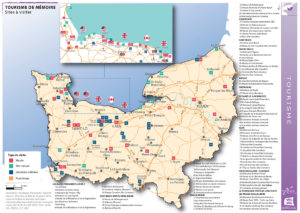 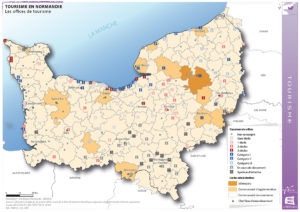 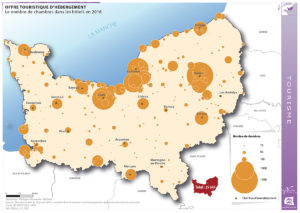 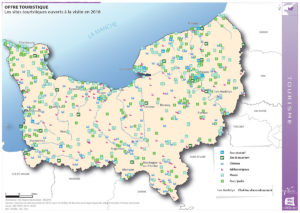 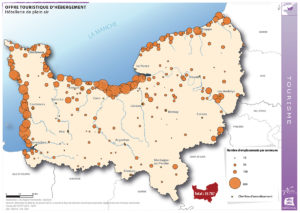 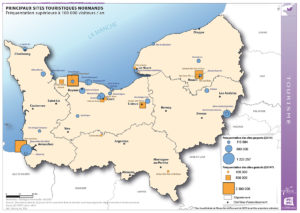 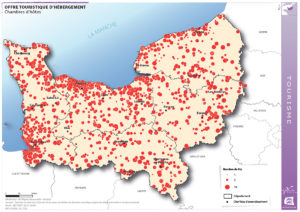 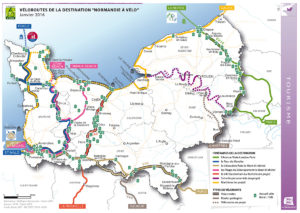 Beaches, cows, horses, apple trees in blossom and half-timbering of course, yet so many other treasures to discover. A land of history, from the Vikings to D-Day. A diversity of extraordinary landscapes enhanced with fabulous heritage including the marvel of the Western World, the Mont Saint-Michel. Deauville, Honfleur, Granville, Étretat… Giverny, Bagnoles de l’Orne, the Pin national stud, etc. Water sports, walking, golf and, of course... gastronomy.

In 911, the Treaty of Saint-Clair-sur-Epte marked the foundation of Normandy. William the Conqueror, Duke of Normandy, born in Falaise to become King of England in 1066 after his victory at the Battle of Hastings. The fabulous Bayeux Tapestry tells the story of his epic adventure. In Caen, the castle and two abbeys bear witness to his era and civilisation. Richard the Lionheart, his great great grandson, reigned for 10 years. The story of Joan of Arc is tragically associated with that of Rouen, where her trial was held. The Maid of Orleans perished at the stake, installed in the town’s Place du Vieux Marché.

In 1944, on the 6th of June and the long summer that followed, men from the world over came to Normandy to fight, to vanquish Nazism and to offer Europe newfound freedom. Memories of these events are forever engraved in the region’s collective memory and, every year, it commemorates and pays homage to the veterans and civilians who lost their lives. Today, the many sites of remembrance, cemeteries, monuments and museums convey the same fundamental values: Reconciliation, Peace and Freedom.

The great diversity of Normandy’s architectural heritage is an unrivalled characteristic inherited from its eventful past. A diversity of construction, traditional skills and creations that offers a vast array of marvels to discover and admire: medieval buildings, castles and manor houses, seaside resorts, post-war reconstruction, etc. Five of Normandy’s villages are among the ‘Most Beautiful Villages of France’: Beuvron-en Auge, Barfleur, Le Bec-Helloin, Lyons-la-Forêt and Saint-Céneri-de-Gérei.

Normandy is also the ‘cradle of Impressionism’. It was in Le Havre that Claude Monet painted ‘Impression, Sunrise’ in 1872, hence giving a name to a brand new artistic movement. It was also in the heart of Normandy that this major pictorial movement, that was to continue to leave an indelible mark on the history of art, was to blossom and thrive. This instantaneous painting technique was born under Normandy’s inimitable skies, along its bright foreshores and across its verdant valleys. The next edition of the Normandy Impressionist Festival will be held in 2020.

Normandy offers a multitude of different landscapes: the countryside, the marshes, the bocage hedgerows, the coast, the heights, etc. The coast that runs from the Mont Saint-Michel to Le Tréport, via the Chausey islands, the Nez de Jobourg, Deauville, Honfleur, Le Havre and Etretat. The landscapes of the Perche and the Pays d’Auge areas, with their typical Normandy cows under the apple trees and horses in the prairies. But also the loops of the Seine, Suisse Normande, Bagnoles-de-l’Orne.

On foot, on horseback, by bike, yacht, microlight aircraft… Whatever your passion, whatever your pace, Normandy awaits you. 700km of marked and developed cycle routes. 3,000km of GR walking-hiking routes and 4 major horse-riding routes. Bungee jumping, climbing, kitesurfing, race tracks, parachuting, treetop adventure trails, etc. Normandy is also a region of thrills and spills. And it is a prime destination for golfing enthusiasts.

Nature, fauna and flora waiting to be discovered. Walking and boating trips. A stay at the Center Parcs holiday village or in one of the 12 ‘Famille Plus’ certified resorts offering events and activities specially designed for young visitors. Visits to the Cité de la Mer, the zoological parks of Cerza, Champrepus, Biotropica and Jurques. Leisure time at Festyland or the region’s other amusement parks, adventure trails, leisure bases and riding centres.

Normandy offers a large palette of flavours and secret recipes. An exquisite experience. Camembert, Livarot, Pont-L’Évêque and Neufchâtel cheeses, butter and cream from Isigny, for dairy products, cider, poiré (perry), pommeau and calvados, for apples and pears, all benefiting from an AOC controlled designation of origin. Treasures from the sea: scallops, oysters, mussels, fish and shellfish. Normande beef, salt meadow lamb, Vire ‘andouille’ chitterling sausage, vegetables and desserts, all made in Normandy. Places to visit – the Village Fromager (cheese village), the Benedictine Palace, a number of distilleries, etc.

Tourism is the perfect playground for innovation: mobile services, contactless technologies, augmented reality, virtual tours, interactive trails – the interactive visit of the Avranches Scriptorial, virtual and augmented reality at the Cité de la Mer in Cherbourg-Octeville and at Falaise Castle, the Pass Tourisme (NFC) in Caen, etc. Late 2017, the Normandy Tourist Board launched its local tourism website’: a tailor-designed selection among a total of 60,000 offers with access to an original selection of ‘Normandy Secrets’.