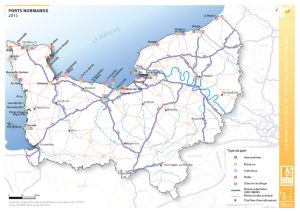 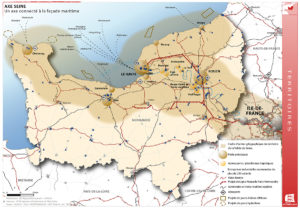 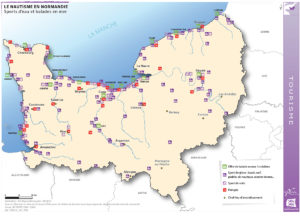 From north to south, a diversity of remarkable landscapes: – The Côte d’Albâtre (Alabaster coast), a daunting wall of chalk from Le Tréport to Le Havre. – The Côte Fleurie (Flowery coast), fine sandy beaches from Honfleur to Cabourg. – The Côte de Nacre (Mother of pearl coast) and the Bessin coast, theatres of the D-Day Landings. – The wild Cotentin cliffs, including Joburg, looming 128 metres above sea level. – Then a 100km-long ribbon of sand as far as the Mont Saint-Michel, the marvel of the Western world, the bay of which is home to ultra fast-rising tides. – Not forgetting the Channel Islands: Jersey, Guernsey, Alderney, Sark, Chausey, etc.

The port of Le Havre is France’s leading maritime gateway. 66 million tonnes of traffic in 2016. Over 6,000 ship to port per year (40% of which are container tankers). Ships of all sizes and all draughts are welcomed in all tidal conditions. Maritime links with 500 ports across the globe. 1,000 establishments, 32,000 direct jobs.

Normandy is the cradle of the historic sea-bathing vogue, starting with the baths in Dieppe, inaugurated as early as 1812. The creation of Deauville under the Second French Empire, the first ever paid leave in 1936… Normandy’s beaches tell us the tale of two centuries of history. Prestigious villas, horse racing, casinos, polo, festivals, etc. The exceptional charm of Honfleur, Etretat, Granville, Cabourg and so many other destinations. Countless beaches, 12 of which are certified ‘Famille Plus’ (family-friendly).